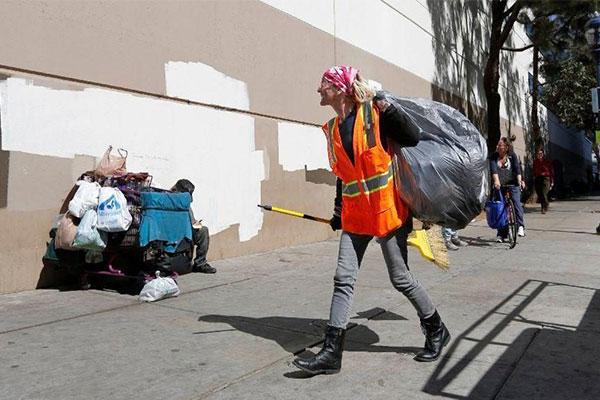 I’ll admit, I probably spend more time on Twitter for a senior in high school with plenty of real-life responsibilities should be. Yet, despite producing its fair share of mindless garble, Twitter can sometimes showcase inspirational stories. For example, one evening while scrolling through the app before bed, I came across a viral story about a program in Fort Worth, Texas that pays some of the city’s homeless people to pick up trash around the city in hopes of getting people back on their feet, while also keeping the city clean.

In a quote provided to NBC’s Dallas-Fort Worth affiliate, Frank Crist, an employee of the program, Clean Slate, stated that he feels a sense of purpose by being a part of the program: “It just makes you feel better keeping [the city] cleaned up.” According to the KXAS report, the initiative costs the city almost $50,000, including $10/hour pay for employees, and eliminated almost four tons of waste last year‑‑a pretty solid return on investment.

After reading the report on this inspirational idea, I decided to research it further myself. The program is a product of Fort Worth’s Presbyterian Night Shelter, a homeless shelter with the goal of lifting people out of poverty through job training programs called social enterprises and by providing them shelter until they are back on their feet. The program’s founders cite the fact that unemployment was the primary reason for homelessness in the Fort Worth area, a $2.31 return on investment for every dollar a social enterprise spends on an employee, and savings to public services as reasons for starting the program. Presbyterian Night Center lists litter pickup, janitorial services, a commercial kitchen, and a fulfillment center among its Fort Worth social enterprises.

The man interviewed for that NBC story, Frank Crist, said he found a new, permanent home after 23 months of living in the shelter with many of those months spent working for Clean Slate. The success of Clean Slate has highlighted the need for more homeless programs that place people on the path to employment and permanent housing. Tarrant County Homeless Coalition executive director Otis Thornton told the Fort Worth Star‑Telegram that “[Fort Worth] doesn’t have enough places for people to land” and that shelters should focus on actively helping homeless individuals find employment.

Employment opportunities, as Crist attested, will give the homeless, many of whom are in their position because they are out of work, a sense of dignity and purpose and will put them on the path to permanent success. Providing those less fortunate than us with dignity and purpose is also the mission of Threads of Care. As a teen-run organization, we are uniquely focused on child homelessness and work with local and global nonprofits to provide people our own age with new and gently used clothing. We coordinate clothing drives at local schools and even have a fundraising drive to which you can donate online.

This Texas success story, as well as the success of our own organization, shows that empowering people with dignity and hope works, and we hope you’ll join us as we work to put a dent in teen poverty.